Looking Ahead: Scripture Readings for October 4, 2020

Beloved God, from you come all things that are good. Lead us by the inspiration of your Spirit to know those things that are right, and by your merciful guidance, help us to do them, through Jesus Christ, our Savior and Lord. Amen. 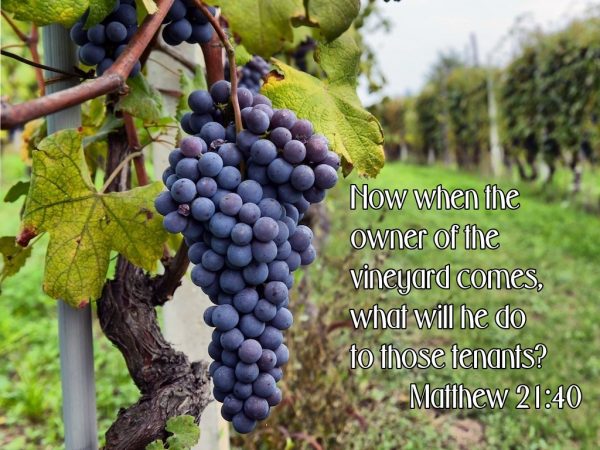 In today’s gospel reading, Jesus tells a parable of the vineyard, an image of Israel, the prophets’ mission, and Christ’s death. For Christians, the vineyard also speaks of God’s love poured out in the blood of Christ, given to us for the forgiveness of sin. Grafted onto Christ the vine at baptism, we are nourished with wine and bread, that we may share Christ’s sufferings and know the power of his resurrection.

The prophet sings a sad, parable-like love song about the relationship between God and Israel. In this song Israel is compared to a promising vineyard. Despite God’s loving care, the vineyard that is Israel has brought forth “wild grapes” of injustice and distress, when fine grapes of justice and righteousness were expected.

The Song of the Unfruitful Vineyard

Let me sing for my beloved my love-song concerning his vineyard:My beloved had a vineyard on a very fertile hill. He dug it and cleared it of stones, and planted it with choice vines;he built a watch-tower in the midst of it, and hewed out a wine vat in it;he expected it to yield grapes, but it yielded wild grapes.

And now, inhabitants of Jerusalem and people of Judah,
judge between me and my vineyard.
What more was there to do for my vineyard that I have not done in it?When I expected it to yield grapes, why did it yield wild grapes?
And now I will tell you what I will do to my vineyard.

I will remove its hedge, and it shall be devoured;I will break down its wall, and it shall be trampled down. I will make it a waste; it shall not be pruned or hoed,
and it shall be overgrown with briers and thorns;I will also command the clouds that they rain no rain upon it.

For the vineyard of the Lord of hosts is the house of Israel,
and the people of Judah are his pleasant planting;
he expected justice, but saw bloodshed;righteousness, but heard a cry!

Restore us, O God of hosts;
let your face shine, that we may be saved.
You brought a vine out of Egypt;
you drove out the nations and planted it.
You cleared the ground for it;
it took deep root and filled the land. The mountains were covered with its shade,
the mighty cedars with its branches;
it sent out its branches to the sea,
and its shoots to the River. Why then have you broken down its walls,
so that all who pass along the way pluck its fruit?
The boar from the forest ravages it,
and all that move in the field feed on it.
Turn again, O God of hosts;
look down from heaven, and see;
have regard for this vine, the stock that your right hand planted.

Paul reviews some of his supposed credentials, which no longer have any bearing in comparison to the right relationship he has been given through the death of Christ. The power of Christ’s resurrection motivates him to press on toward the ultimate goal, eternal life with Christ.

If anyone else has reason to be confident in the flesh, I have more: circumcised on the eighth day, a member of the people of Israel, of the tribe of Benjamin, a Hebrew born of Hebrews; as to the law, a Pharisee; as to zeal, a persecutor of the church; as to righteousness under the law, blameless.

Yet whatever gains I had, these I have come to regard as loss because of Christ. More than that, I regard everything as loss because of the surpassing value of knowing Christ Jesus my Lord. For his sake I have suffered the loss of all things, and I regard them as rubbish, in order that I may gain Christ and be found in him, not having a righteousness of my own that comes from the law, but one that comes through faith in Christ, the righteousness from God based on faith. I want to know Christ and the power of his resurrection and the sharing of his sufferings by becoming like him in his death, if somehow I may attain the resurrection from the dead.

Pressing towards the Goal

Not that I have already obtained this or have already reached the goal; but I press on to make it my own, because Christ Jesus has made me his own. Beloved, I do not consider that I have made it my own; but this one thing I do: forgetting what lies behind and straining forward to what lies ahead, I press on towards the goal for the prize of the heavenly call of God in Christ Jesus.

Jesus tells a parable to the religious leaders who are plotting his death, revealing that their plans will, ironically, bring about the fulfillment of scripture.

The Parable of the Wicked Tenants

‘Listen to another parable. There was a landowner who planted a vineyard, put a fence around it, dug a wine press in it, and built a watch-tower. Then he leased it to tenants and went to another country. When the harvest time had come, he sent his slaves to the tenants to collect his produce. But the tenants seized his slaves and beat one, killed another, and stoned another. Again he sent other slaves, more than the first; and they treated them in the same way. Finally he sent his son to them, saying, “They will respect my son.” But when the tenants saw the son, they said to themselves, “This is the heir; come, let us kill him and get his inheritance.” So they seized him, threw him out of the vineyard, and killed him. Now when the owner of the vineyard comes, what will he do to those tenants?’ They said to him, ‘He will put those wretches to a miserable death, and lease the vineyard to other tenants who will give him the produce at the harvest time.’

Jesus said to them, “Have you never read in the scriptures:    ‘The stone that the builders rejected has become the cornerstone;     this was the Lord’s doing, and it is amazing in our eyes’? Therefore I tell you, the kingdom of God will be taken away from you and given to a people that produces the fruits of the kingdom. The one who falls on this stone will be broken to pieces; and it will crush anyone on whom it falls.”

When the chief priests and the Pharisees heard his parables, they realized that he was speaking about them. They wanted to arrest him, but they feared the crowds, because they regarded him as a prophet.