Looking Ahead: Scripture Readings for Sept 20, 2020

Almighty and eternal God, you show perpetual lovingkindness to us your servants. Because we cannot rely on our own abilities, grant us your merciful judgment, and train us to embody the generosity of your Son, Jesus Christ, our Savior and Lord. Amen. 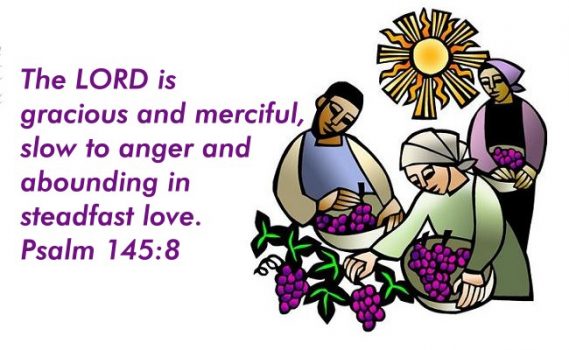 Matthew narrates one of Jesus’ controversial parables, in which Jesus says the reign of God is like workers who get paid the same no matter when they start. When God changes his mind about punishing Nineveh for their evil ways, Jonah is angry. Yet God is gracious and merciful, abounding in steadfast love. In baptism we receive the grace of God that is freely given to all. As Luther wrote, in the presence of God’s mercy we are all beggars.

After Jonah’s short sermon in 3:4, the Ninevites all repented and God decided to spare the city. Jonah objected to this and became even more angry when God ordered a worm to destroy a plant that was providing shade. The book ends with a question that challenges any who are not ready to forgive: You, Jonah, are all worked up about a bush, but should not I be concerned about a hundred and twenty thousand Ninevites who do not know the difference between their right and left hands?

10 When God saw what they did and how they turned from their evil ways, he relented and did not bring on them the destruction he had threatened.

Jonah’s Anger at the Lord’s Compassion

4 But to Jonah this seemed very wrong, and he became angry. 2 He prayed to the Lord, “Isn’t this what I said, Lord, when I was still at home? That is what I tried to forestall by fleeing to Tarshish. I knew that you are a gracious and compassionate God, slow to anger and abounding in love, a God who relents from sending calamity. 3 Now, Lord, take away my life, for it is better for me to die than to live.”

4 But the Lord replied, “Is it right for you to be angry?”

5 Jonah had gone out and sat down at a place east of the city. There he made himself a shelter, sat in its shade and waited to see what would happen to the city. 6 Then the Lord God provided a leafy plant[a] and made it grow up over Jonah to give shade for his head to ease his discomfort, and Jonah was very happy about the plant. 7 But at dawn the next day God provided a worm, which chewed the plant so that it withered. 8 When the sun rose, God provided a scorching east wind, and the sun blazed on Jonah’s head so that he grew faint. He wanted to die, and said, “It would be better for me to die than to live.”

9 But God said to Jonah, “Is it right for you to be angry about the plant?”

10 But the Lord said, “You have been concerned about this plant, though you did not tend it or make it grow. It sprang up overnight and died overnight. 11 And should I not have concern for the great city of Nineveh, in which there are more than a hundred and twenty thousand people who cannot tell their right hand from their left—and also many animals?”

The Lord is slow to anger and abounding in steadfast love. (Ps. 145:8)

A psalm of praise.

I will exalt you, my God the King;
I will praise your name for ever and ever.
Every day I will praise you
and extol your name for ever and ever.
Great is the Lord and most worthy of praise;
his greatness no one can fathom.
One generation commends your works to another;
they tell of your mighty acts.
They speak of the glorious splendor of your majesty—
and I will meditate on your wonderful works.[b]
They tell of the power of your awesome works—
and I will proclaim your great deeds.
They celebrate your abundant goodness
and joyfully sing of your righteousness.
The Lord is gracious and compassionate,
slow to anger and rich in love.

Paul writes to the Philippians from prison. Though he is uncertain about the outcome of his imprisonment, he is committed to the ministry of the gospel and calls on the Philippians to live lives that reflect and enhance the gospel mission.

21 For to me, to live is Christ and to die is gain. 22 If I am to go on living in the body, this will mean fruitful labor for me. Yet what shall I choose? I do not know! 23 I am torn between the two: I desire to depart and be with Christ, which is better by far; 24 but it is more necessary for you that I remain in the body. 25 Convinced of this, I know that I will remain, and I will continue with all of you for your progress and joy in the faith, 26 so that through my being with you again your boasting in Christ Jesus will abound on account of me.

Life Worthy of the Gospel

27 Whatever happens, conduct yourselves in a manner worthy of the gospel of Christ. Then, whether I come and see you or only hear about you in my absence, I will know that you stand firm in the one Spirit, striving together as one for the faith of the gospel 28 without being frightened in any way by those who oppose you. This is a sign to them that they will be destroyed, but that you will be saved—and that by God. 29 For it has been granted to you on behalf of Christ not only to believe in him, but also to suffer for him, 30 since you are going through the same struggle you saw I had, and now hear that I still have.

Jesus tells a parable about God’s generosity, challenging the common assumption that God rewards people according to what they have earned or deserve.

The Parable of the Workers in the Vineyard

“For the kingdom of heaven is like a landowner who went out early in the morning to hire workers for his vineyard. 2 He agreed to pay them a denarius for the day and sent them into his vineyard. 3 “About nine in the morning he went out and saw others standing in the marketplace doing nothing. 4 He told them, ‘You also go and work in my vineyard, and I will pay you whatever is right.’ 5 So they went.

7 “‘Because no one has hired us,’ they answered.

“He said to them, ‘You also go and work in my vineyard.’

8 “When evening came, the owner of the vineyard said to his foreman, ‘Call the workers and pay them their wages, beginning with the last ones hired and going on to the first.’

13 “But he answered one of them, ‘I am not being unfair to you, friend. Didn’t you agree to work for a denarius? 14 Take your pay and go. I want to give the one who was hired last the same as I gave you. 15 Don’t I have the right to do what I want with my own money? Or are you envious because I am generous?’